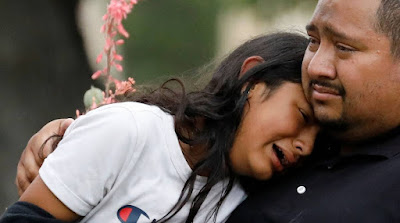 A teenage gunman killed at least 19 children and two adults after storming into a Texas elementary school Tuesday, the latest bout of gun-fueled mass murder in the United States and the nation’s worst school shooting in nearly a decade. Several people, including children, were injured. Some are in critical condition.

After confusing early accounts of the death toll, the state attorney general’s office in an official statement put the tally of lives lost at 18 children and two adults, including the gunman. A Texas Department of Public Safety spokesperson later told CNN that 19 school children and two adults were killed, not counting the shooter. One of the adults was a teacher.

The school’s student body consists of children in the second, third and fourth grades, according to Pete Arredondo, chief of the Uvalde Consolidated Independent School District Police Department, who also addressed reporters. Pupils in those grades would likely have ranged in age from 7 to 10.

Speaking from the White House hours later, a visibly shaken US President Joe Biden urged Americans to stand up to the politically powerful US gun lobby, which he blamed for blocking enactment of tougher “common-sense” firearms safety laws.

Biden ordered flags flown at half-staff daily until sunset on Saturday in observance of the tragedy.

University Hospital in San Antonio said on Twitter that it had received four patients from the shooting in Uvalde, of which a 66-year-old woman and a 10-year-old girl are listed in critical condition.

Uvalde Memorial Hospital said 15 students from Robb Elementary were treated in its emergency room, with two transferred to San Antonio for further care, while a third patient transfer was pending. It was not immediately clear whether all of those students survived.

A 45-year-old victim grazed by a bullet was also hospitalised at Uvalde Memorial, the hospital said.

The South Texas Blood and Tissue Center issued a public appeal for blood donations. They have already sent over 15 units of blood and are running out. There is currently a blood shortage at the local hospitals where the wounded are being treated, reported PTI. Emergency blood donation appointments are being held on Wednesday.

Governor Greg Abbott said that the suspect, identified as Salvador Ramos, was apparently killed by police officers, and that two officers were struck by gunfire, though the governor said their injuries were not serious.

The 18-year-old also had shot his own grandmother before fleeing from the scene, then crashing his getaway car and launching a bloody rampage at Robb Elementary School in the town of Uvalde, Texas, about 130 km west of San Antonio.

The motive was not immediately clear. Authorities said the gunman acted alone. (Read an account of how the attack unfolded.)

Eva Mireles on Tuesday went to a job she seemed to love, teaching fourth grade in the small Texas town of Uvalde, but she never came home, murdered along with 19 pupils and another adult.

In a short biography posted on the school district’s website, Mireles had written she had “a supportive, fun, and loving family” comprised of her husband, her college-graduate daughter, and “three furry friends.” “I love running, hiking, and now you just might see me riding a bike!!” Mireles wrote on the website.

Her husband, Ruben Ruiz, is a police officer at the school district’s police force, the agency investigating the massacre.

Details of the deceased

The names of the deceased and other details were yet to be released. In addition to the confirmed deaths, a number of people have been injured. No number of the injured has been released.

A disturbing message on the school’s website read: “Robb Elementary Parents, please do not pick up students at this time. Students need to be accounted for before they are released to your care. You will be notified to pick up students once all are accounted for.” Officials said the city’s civic centre was being used as a reunification centre where the kin of victims can procure information from the state and coordinate other functions.

The Robb Elementary School in Texas, now under the international spotlight, reportedly has an enrollment of just under 600 students, nearly 90% of them Hispanic. Situated in the heavily Latino town of Uvalde, the school serves a close-knit community of students in the second, third and fourth grades — that is, kids of around seven to ten years of age.

This was the school’s last week of classes before the summer break. A Reuters report said that the students had visited the zoo and participated in a gifted-and-talented showcase, recent posts on the school’s Facebook page showed. Tuesday was awards day, according to the calendar, and pupils were invited to wear a nice outfit and fun shoes as part of a “footloose and fancy” theme.

The school district said the elementary school, where the student mission statement is “Live. Learn. Love. Lead,” would remain closed for the final days of the school year.

In Uvalde, all schools were locked once the gunshots were heard.

Hours after the shooting, police had cordoned off the school with yellow tape. Police cruisers and emergency vehicles were scattered around the perimeter of the school grounds. Uniformed personnel stood in small clusters, some in camouflage carrying semi-automatic weapons.

The day’s horrors were reflected on the Facebook page of Robb Elementary School.

Earlier this week, its posts showed the usual student activities. But on Tuesday, a note was posted at 11.43 am (around 10 pm IST): “Please know at this time Robb Elementary is under a Lockdown Status due to gunshots in the area. The students and staff are safe in the building.”

A second post was more explicit: “There is an active shooter at Robb Elementary. Law enforcement is on site.” Administrators asked parents to stay away. And finally, a note was posted advising parents that they could meet their children at the small city’s civic centre.

The rampage was the latest in a series of mass school shootings that have periodically reignited a fierce debate between advocates of tighter gun controls and those who oppose any legislation that could compromise the US Constitutional right of Americans to bear arms.

Tuesday’s shooting in Texas was the deadliest at a US school since a gunman killed 26 people, including 20 children, at Sandy Hook Elementary School in Connecticut in December 2012. In 2018, a former student at Marjory Stoneman Douglas High School in Parkland, Florida, killed 17 students and educators. (Here’s a look at some of the deadliest school shootings in the US)

Biden, addressing the nation after the tragedy, pleaded for action to address gun violence after years of failure and blamed firearm manufacturers and their supporters for blocking legislation in Washington.

Biden’s call for gun measures was booed at a campaign event in Georgia hosted by Herschel Walker, who won the Republican nomination for US Senate.

Meanwhile, Vice President Kamala Harris said earlier that people normally declare in moments like this, “our hearts break — but our hearts keep getting broken … and our broken hearts are nothing compared to the broken hearts of those families.”

“We have to have the courage to take action … to ensure something like this never happens again,” she said.

Echoing Biden’s call, former President Barack Obama, who has called the day of the Sandy Hook shooting the darkest of his administration, said, “It’s long past time for action, any kind of action.”

exas Senator Ted Cruz described the Uvalde shooting as “truly horrific”, but said gun reforms were not the way to prevent such crimes.

Speaking to reporters, he said that restricting the rights of “law-abiding citizens… doesn’t work. It’s not effective. It doesn’t prevent crime.” He said “going after felons” is what prevents such crimes and he criticised other politicians for trying to “advance their own political agenda” by calling for gun control.

He added that from past experience, armed law enforcement on campus is the most effective way of keeping children safe. “We don’t know the details of what happened at Robb Elementary School, but there will be a lot of time to examine what steps could have been taken proactively to enhance the safety and security of the school right now,” he said.